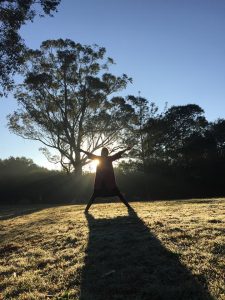 “Why work with the shadow?”

Because there are unconscious forces driving our lives that if we bring into awareness we:

The Shadow can be seen as that which we have had to, or chosen, to push away, avoid, disown, reject in ourselves. Very often it’s what we don’t like in others (far easier to see others’ shadows than our own).

When we are ready…often when there is safety and support…we can allow the emergence of those aspects of the Shadow that can guide us incl:
-unconscious patterns
– addictions
– ailments
– triggers
– emotions
– behaviors, etc.

When we own our shadows it also means that not so much of the collective Shadow has to play out on the global stage such as in politics, environment, financial, educational, religion, fundamentalism, etc via greed, denial, public shootings, wars, deceit, power imbalance, epidemics of ‘numbing out’ such as drugs (and I include prescriptions here), institutions of repression or control, inequality and more.

“But won’t focusing on the Shadow bring negative energy into my life?”

The Shadow is already there driving your life. Truly! We can’t escape, think away or meditate away the Shadow.

Denial of the Shadow is one of the major issues of our times. While the New Age has brought many wonderful things into modern life, the focus on so-called ‘positive’ emotions or energies has been catapulted out of balance. This, media/marketing and the culture of distraction, disassociation and instant gratification has helped created fear of the Shadow.

The Shadow is not what causes the problems – it’s our rejection of it and refusing to acknowledge, understand and connect with the Shadow that creates problems and difficult experiences.

Another way to see it: it is not The Shadow, it’s our behavior of rejecting the Shadow and subsequent consequences that is the problem.

The Shadow won’t hurt you, the result of denying it often does.

In our workshops, you have the opportunity to gently and safely identify with and integrate the Shadow. With support, understanding and patience. Its vital, necessary, essential, empowering and healing.

If you have read this far, then you are probably ready!